An event every week that begins at 9:00 am on Monday, Tuesday, Wednesday and Thursday, repeating until September 28, 2019 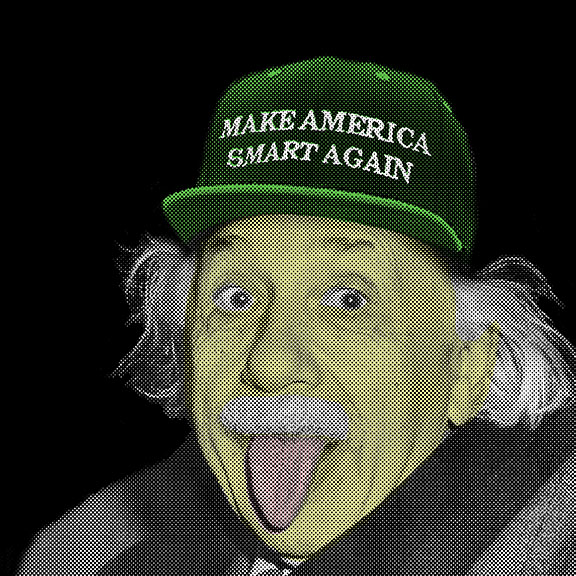 Our next artist on display, Tim Miller, is a staple of the gallery space, having participated in the grand opening of Grey Art Gallery, and was the first show when we changed our name to Converge Gallery. Miller has always pushed the boundaries and experiments with new techniques and substrates when producing his art. For September we will be showcasing his “Halftones” series. The exhibition opens Friday, September 6 from 6 – 9pm, and is on display until Saturday, September 28.

The Halftones series explores the way that culture, politics, and technology have transformed modern American society. The square format, meme-like quality, and hashtag title conventions of the work reflect current cultural trends while the halftone process Miller uses is a reference to the print media that the digital revolution has displaced. The use of color is often garish, using bright complementary colors that often clash creates a visual disturbance to reinforce the often disturbing context of the work. Themes in Miller’s work include growing up, socio-political issues, mental illness, metaphysics, redemption, and the concepts of time and change.

Timothy Allen Miller lives in Williamsport Pennsylvania near his two fantastically incredible sons and is the Graphic Communications instructor at the Williamsport Area High School. He has a Bachelor of Science degree in Graphic Design from the Pennsylvania College of Technology as well as a Minor in Graphic Communications (printing). His work covers many different themes but his modus operandi remains constant: the use of common objects relating to each other in uncommon ways.

Early in Miller’s life, he was greatly influenced by the work of Jasper Johns and Joseph Beuys. Both of these artists found ways to elevate popular iconography through the prism of their own experience. Like Marcel Duchamp who preceded them, the observer’s role became to create art’s meaning. Miller has also been greatly influenced by the work of Joseph Cornell who used the evocation of nostalgia to appeal to the viewer and used materials found in thrift shops to make his work. From the work of these artists, Miller was encouraged to find his own voice in the flotsam and jetsam of America’s past and present. Themes in his work include growing up, socio-political issues, mental illness, metaphysics, redemption, and the concepts of time and change.

There is a darkness to Miller’s work and he believes that this is due to the darkness in the act of redemption: the return to the unpleasant past and the balancing of it with a hopeful future. Miller often uses gilding as a way to emphasize this transition from the valueless back to the valuable. His process works on a deeply subconscious level. Often he starts working without understanding where it will take him, often not knowing what the meaning of the work is until he needs the final pieces to make it complete. There is a very Taoist bend in Miller’s work: to try to explain is often to chew his own teeth. As Lao Tzu wrote, ”The journey of a thousand miles begins with one step” this is Miller’s way.